Motha di Daal (Moth pronounced Mawt) or Moth beans as known in English is a lentil that makes really flavourful daals and soups.  The beans have a nutty flavour and as they cook down they release a creaminess which makes a very heart-warming dish especially when cooked as I have in this recipe. The flavour of the spices and fresh ginger and garlic work so well together, making it a comforting dish – a daal cooked often in my home during the cooler months.

Every time I cook it, it takes me back almost 30 years, when I hadn’t been married for long and the children were very little. My father had retired and he had come to my house to help us to get our garden in order.

Dad was an avid gardener – our summer meals were mostly cooked with his crop from the garden.  Spring onions, garlic, potatoes, carrots, coriander, chillies, peas, mint, radishes – you name it, Dad grew it.  I loved going into the garden to pick the mint for chutney or coriander to garnish the evening meal.  He loved his garden and would spend every dry day out in it, every evening he’d be there with the hosepipe watering his pride and joy. He kept one side for his rose bushes and the rest was vegetables.  I would love watching his skin go from white to red and then golden brown.  By the end of the summer he would look like a Greek gentleman – silver hair and golden tan.  He’d work outside in a white vest on really hot days and when he took it off he would have a vest shaped tan which would make us all laugh.

He took so much pride in his appearance, shaved every day with his little brush and shaving cream and his razor which he called his ‘safety’, brushed his hair back with a slick of Brylcreem, a hint of Old Spice always lingering in the house when he was getting ready to go out, and he always dressed in a shirt and trousers – half sleeved in the summer, polished his shoes every weekend, and wore sandals in the summer.  He was very regimental in everything in his life, what he learned in the army saw him through the rest of his days – from waking up in the morning at 3am to pray, set meal times, and bed time, everything was regimented.  He also took great pride in his culture and his roots.  He still followed a lot of the old Punjabi customs from his own childhood and one of those was never to eat at his daughters’ marital home unless he was invited to by her parents in law.  This is very old school thinking for some now, but Dad stuck by that rule.  As the girls don’t ‘supposedly’ contribute in their parents homes, the parents don’t feel it is right to take from them when they are married.  Girls were always looked at as ‘paraya dhan’ – meaning from birth until marriage they were ‘guests’ at their birth home. He was also of the thinking that you never take from your girls – you only give to them, which is still customary in many Punjabi families even now.

However, if the boot had been on the other foot – and the girls’ in laws turned up at their door – her parents would usually drop everything to tend to them.  Times have changed and living outside of the Punjab means people have had to change too. If Dad was alive now I know he would be very disappointed at the way some of our customs have been dropped by the wayside….

I am sure you have gathered by now that I can talk about my Dad forever – he was such a wonderful man – husband, father, brother, son-in-law, uncle, grandfather – the list goes on.  There was no role that he didn’t carry out to his full potential.  I don’t say this just because I am his daughter, his actions spoke for themselves, which I discovered after he passed away. The stories we heard about his good deeds and how many families he had helped when they left the Punjab to come here after he passed away, were so beautiful and made our hearts fill with pride and happiness making the family’s grief easier to bear. This was OUR Dad they were talking about.

So long story short – my husband insisted Dad ate lunch at our house that day as he was suggesting he was going to go home and eat and then come back and finish the job on our garden.  I made my quick Motha di Daal for him and Dad sat and ate his customary 3 roti’s, with no butter, and a little bit of red onion, with my little family.  That was the first and last meal he shared with me in my home – and one I will always remember with great fondness.  Dad broke the rules to eat at my house!!

1 litre of water to cook lentils in pressure cooker

1 tablespoon of oil or ghee

1 tablespoon of minced chillies – or to taste

Chicken Kofte are the healthy alternative to Lamb Kofte. Since moving to Cyprus, I have found chicken mince is a lot easier to source than it is in the UK. You can of course, buy Read more… 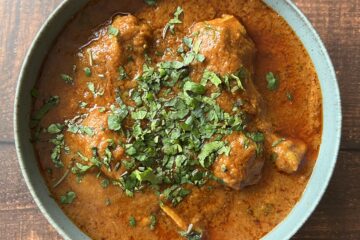 This is one of my favourite chicken recipes, the flavours from it are just outstanding. Two teaspoons of the Achari Masala is all it takes to work the ingredients in the pan into a bittersweet Read more… 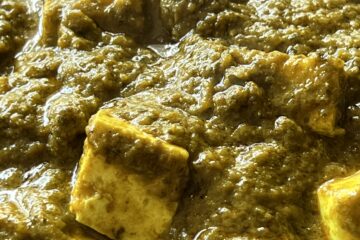 Indian cheese cooked in a thick spicy spinach sauce Palak Paneer is a lovely combination of velvety spiced spinach cooked with delicious cubes of paneer. Many people choose to fry the paneer before adding it Read more…